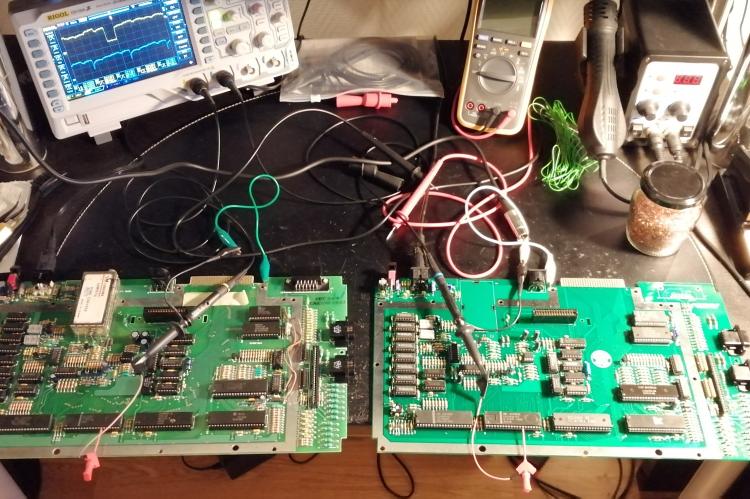 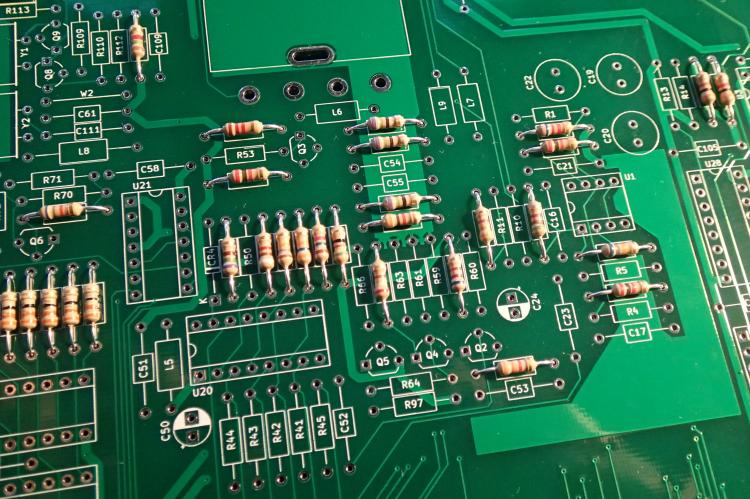 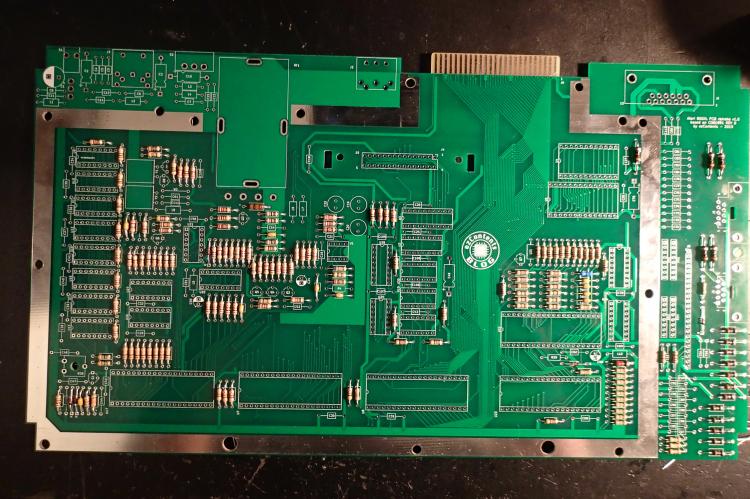 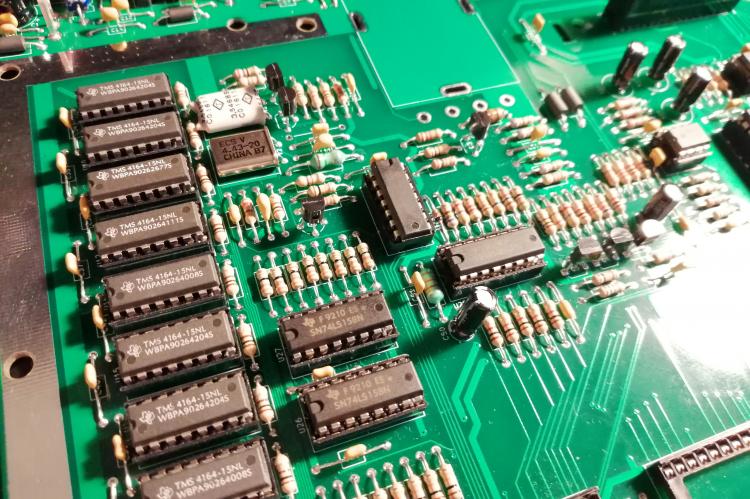 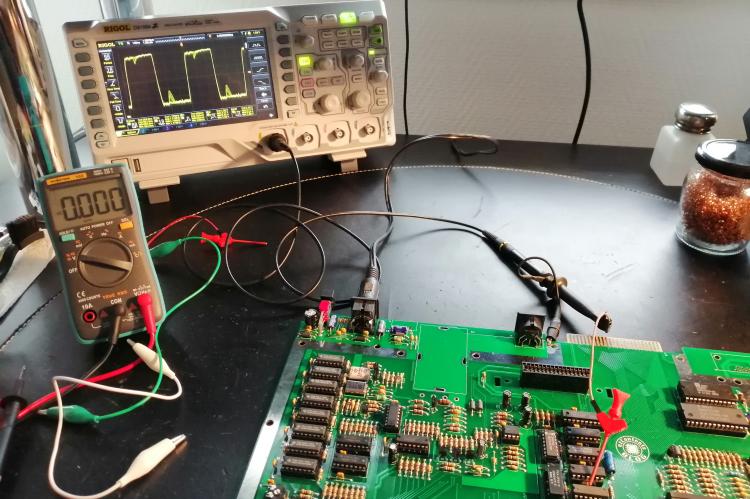 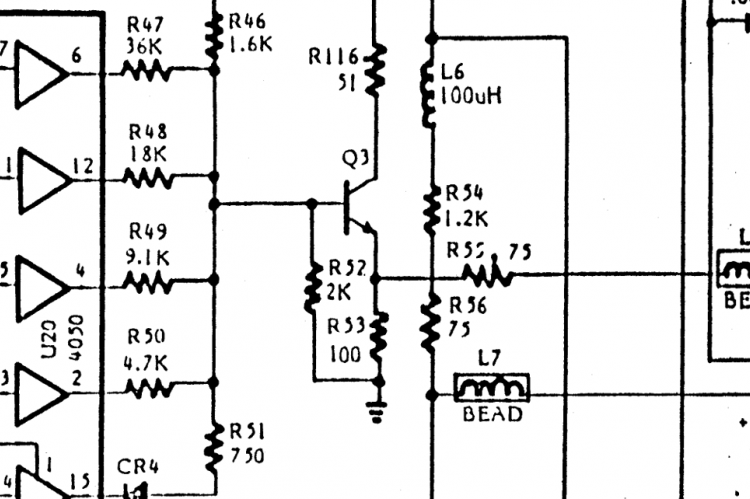 After collecting all the components needed for the Atari board it was finally time to solder them. But what are the chances that the project would work on the first attempt? In my case it didn't and I will describe here my process of troubleshooting.

Best order for soldering the parts on the board is according to their height. So I have started to place all the resistors into their designated holes, solder them and the cutting off the wires. 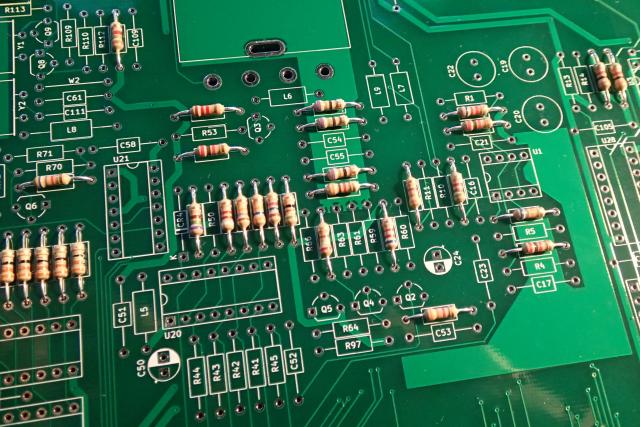 Then it was the turn for all the axial capacitors, inductors and ferrite beads as the size is actually the same as of the resistors. Actually all the ceramic capacitors and inductors are axial on the original Atari board. It looks very neat, but unfortunately it is almost impossible to find some of the values in their axial form. As an acceptable alternative, I have chosen to use radial MLCC capacitors and make them look somewhat axial. 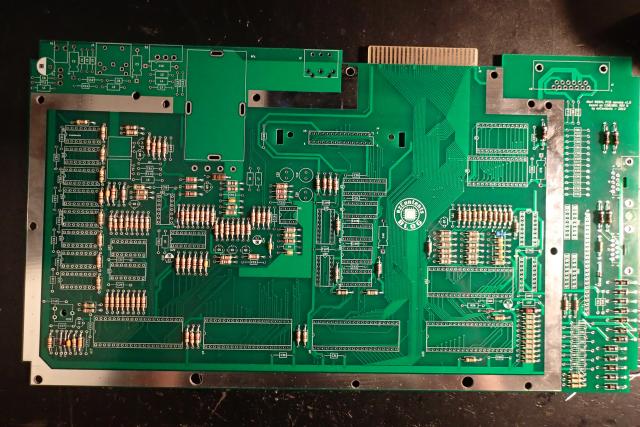 Next I soldered the 2 crystals, IC-sockets, resistor-networks, transistors, electrolytic capacitors, all the connectors and the power switch.

Finally I have picked the custom Atari chips from another working Atari and placed them carefully inside the sockets. 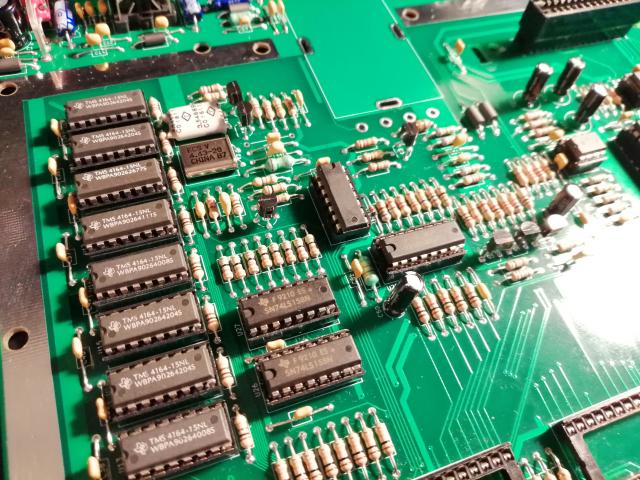 It was finally time to test the board. I was very excited and was hoping that everything would work in one go. Unfortunately this was not the case. After connecting the power supply and flipping the power switch nothing happened. No screen output, nothing. It was very disappointing. After processing the dissatisfaction I went back to the board and started the process of troubleshooting.

In the beginning I had no idea where to start, as there were so many steps in the whole process.

My first idea was to check all the discrete logic and DRAM chips (which were all new) by swapping them with the ones in a working Atari 800XL board. This process resulted in finding one IC that was not working, which was the 74LS158. Funny to mention that this broken chip was giving black and white screen on the old working Atari board, unfortunately replacing the chip did nothing to the new Atari board. This gave me an idea that there could be something wrong around the video output signal, but first I wanted to check if there is a standard procedure to troubleshoot the Atari 800XL board.

So I have started to look at all the available service documents from Atari and have found something that might help. It was the Sams Computerfacts Technical Service Data for Atari 800XL, which I found on one of the Atarimania pages. In that document you can find voltages on some points in the circuit and oscilloscope outputs.

The document started to describe the following tests: 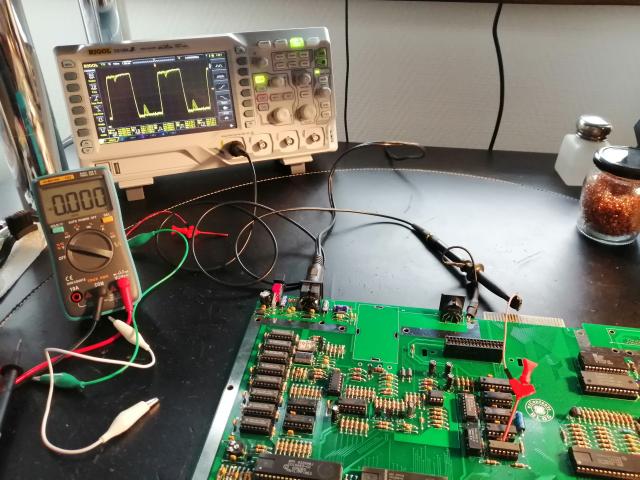 Looking a bit more on the board and probing some more points with the multimeter I have also discovered another missing connection which was connecting C66 to ground, so I also soldered another wire. Unfortunately this also did not fix the problem and there was still a black screen after turning it on. 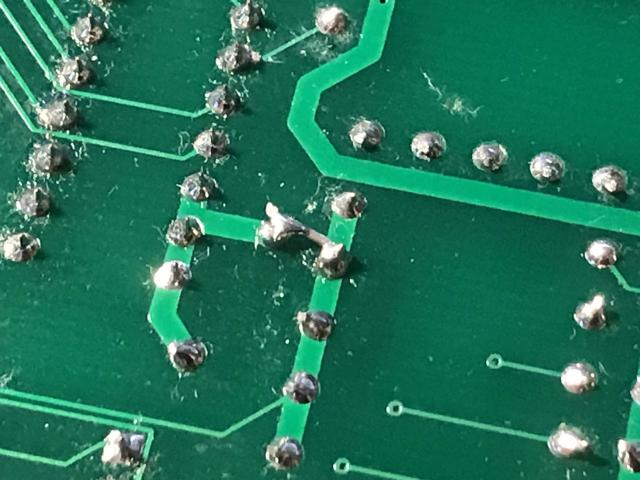 Then I have started with step 4: The video. The test described went OK and there was a waveform present at emitter of Q3, but still I wanted to look a bit deeper. There was a mention of R54 in the tekst and I have started to probe all connections around that area and compare them to the ones on the original board. To my surprise one of the connections did not exist. R53 to R54. I have checked the schematics and my design was matching. Unfortunately the PCB differed with it and there was an error in the original Atari schematics. 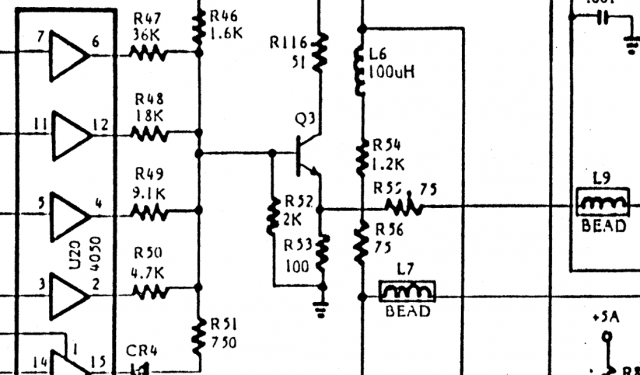 I have soldered a wire for the missing connection and then turned on the computer. I could see a blue screen with the white cursor on top, but it did not move and there was no READY message showing up and the screen was very noisy. So I continued the troubleshooting process. 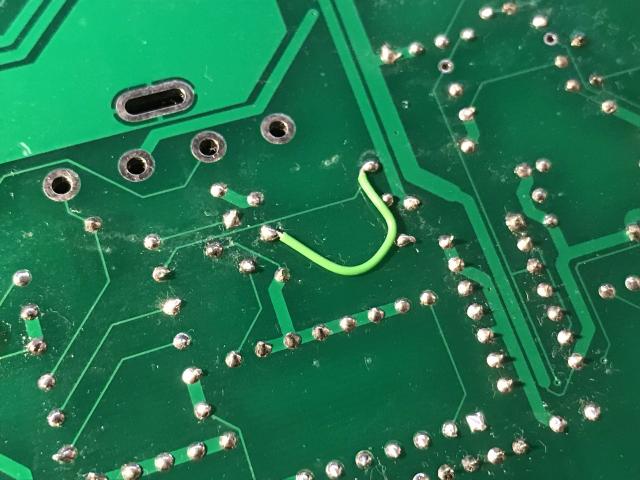 While probing some more, I came across the POKEY chip and have noticed some noise showing up on the scope. I thought that the chip was broken and decided to remove it. After turning the Atari on I got a READY prompt! I did not know that Atari could boot to BASIC without it. However it was not a broken POKEY chip, but this time it was my fault as I forgot to draw a trace to the ground pin on the POKEY chip. After soldering a wire everything worked as expected! 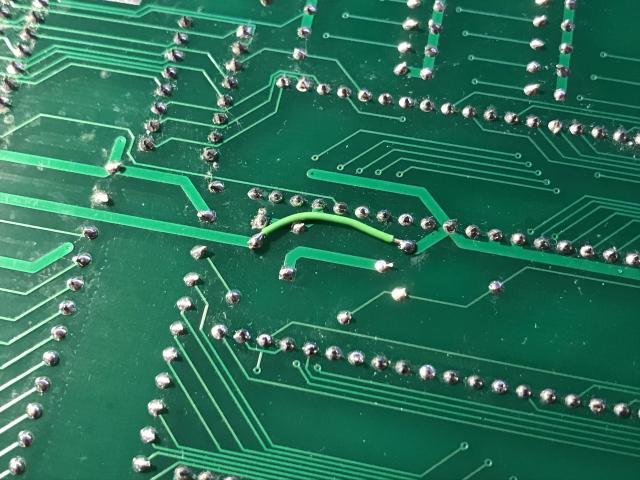 If you wish to create your own PCB, I have made the Atari 800XL PCB Gerber files available and you can also order them directly at this PCBWay shared project link.